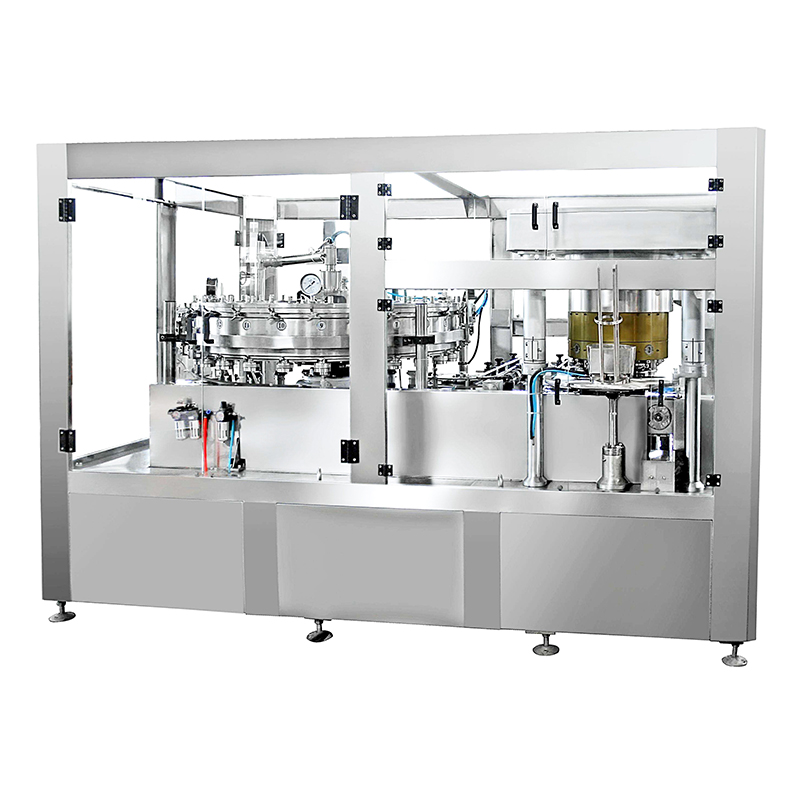 This Beer Filling Machine Wash-filling-capping 3-in-1unit is used to produce glass bottled beer. The BXGF Wash-filling-capping 3-in-1unit:beer Machinery can finish all the process such as press bottle, filling and sealing, it can reduce the materials and Outsiders touch time, improve the sanitary conditions, production capacity and economic efficiency.


Send email to us

The Can Beverage Filling Machine Features

Capper station:
● Electromagnetic sealing heads.
● All 304stainless steel construction.
● No cans no sealing and Automatic stop when lack of sealer.

Introduction Of Can Beer Filling And Sealing Machine

This machine is suitable for isobaric filling and sealing of carbonated beverages in the beer and beverage industry. It has the characteristics of fast filling and sealing speed, consistent liquid level in the tank to the tank opening after filling, stable operation of the whole machine, good sealing quality, beautiful appearance, convenient use and maintenance, touch screen operation, frequency conversion speed regulation, etc. It is an ideal filling and sealing equipment for various beverages and breweries.

This machine is especially suitable for filling and sealing cans in the beer industry. The filling valve can carry out secondary exhaust to the can body, so that the amount of oxygen added to the beer can be reduced to a minimum during the filling process.
Filling and sealing are integral design, using the principle of isobaric filling. The can enters the filling machine through the can feeding star wheel, reaches the predetermined center after the can table, and then the filling valve descends along the supporting cam to center the can and pre-press to seal. In addition to the weight of the centering cover, the sealing pressure is generated by a cylinder. The air pressure in the cylinder can be adjusted by the pressure reducing valve on the control board according to the material of the tank. The pressure is 0 ~ 40KP (0 ~ 0.04MPa). At the same time, by opening the pre-charge and back-pressure valves, while opening the low-pressure annular channel, the back-pressure gas in the filling cylinder rushes into the tank and flows into the low-pressure annular channel. This process is used to implement a CO2 flushing procedure to remove the air in the tank. Through this procedure, the oxygen increase during the filling process is minimized and no negative pressure is generated in the tank, even for very thin-walled aluminum cans. It can also be flushed with CO2.
After the pre-fill valve is closed, the equal pressure is established between the tank and the cylinder, the liquid valve is opened by the spring under the action of the operating valve stem, and the filling starts. The pre-filled gas inside returns to the filling cylinder through the air valve.
When the liquid level of the material reaches the return gas pipe, the return gas is blocked, the filling is stopped, and an over pressure is generated in the gas part of the upper part of the tank, thereby preventing the material from continuing to flow down.
The material pulling fork closes the air valve and the liquid valve. Through the exhaust valve, the exhaust gas balances the pressure in the tank with the atmospheric pressure, and the exhaust channel is far away from the liquid surface, so as to prevent the liquid from being brought out during exhaust.
During the exhaust period, the gas at the top of the tank expands, the material in the return pipe falls back into the tank, and the return pipe is emptied.
At the moment when the can is out, the centering cover is lifted under the action of the cam, and under the action of the inner and outer guards, the can leaves the can table, enters the can conveying chain of the capping machine, and is sent to the capping machine.
The main electrical components of this machine adopt high-quality configuration such as Siemens PLC, Omron proximity switch, etc., and are designed into a reasonable configuration form by the company's senior electrical engineers. The entire production speed can be set by itself on the touch screen according to the requirements, all common faults are automatically alarmed, and the corresponding fault causes are given. According to the severity of the fault, the PLC automatically judges whether the host can continue to run or stop.
Functional characteristics, the whole machine has various protections for the main motor and other electrical appliances, such as overload, overvoltage and so on. At the same time, the corresponding various faults will be automatically displayed on the touch screen, which is convenient for users to find the cause of the fault. The main electrical components of this machine adopt international famous brands, and brands can also be formulated according to customer requirements.
The whole machine is framed by stainless steel plate, which has good waterproof and anti-rust functions.

Write your message here and send it to us